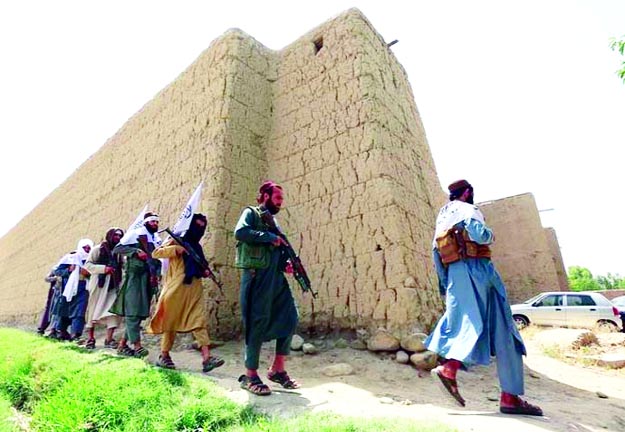 About five months since the Taliban took control of Afghanistan, the country of 40 million people is facing the worst crisis of its painful political upheaval in decades – hunger and starvation.

According to UN reports, nearly 23 million people are in the grip of an acute food crisis while 2 million of them face emergency-level famine. Hospitals are inundated with people, including women and children, suffering from extreme malnutrition while hospitals are running out of medical supplies and a majority of the 50% of female caregivers are too afraid of Taliban dictates to report to work.

Throughout December, leading international media such as CNN and The New York Times reported on the evolving food crisis in Afghanistan due to the failed winter harvest. Their cover comes with warnings that the content may have potentially disturbing visuals – referring to images of malnourished children lying helpless on hospital beds.

In good years, Afghanistan produces enough food grains to meet domestic needs. It even has a surplus to export. The main crops are wheat, rice and barley.

After the Taliban takeover, Afghanistan faces UN sanctions and its assets worth around $10 billion have been frozen across the world. International humanitarian aid reaching Afghanistan is distributed through aid agencies. These helpers completely bypass the country’s banking system and work directly with voluntary organizations. While the world seems to be uniting not to do business with the Taliban, the food crisis does not seem to have an immediate solution and could continue until March, when the new crop will probably be available on the market. But by then, the country’s economy could slide further into chaos, making food grains available only to those close to the Taliban.

Renowned girls’ education rights activist and 2014 Nobel Peace Prize laureate, Malala Yousafzai, has tweeted about the Afghan food crisis almost every day for the past month. But it seems to focus more on what the US or the OIC are doing, not what Pakistan or China are not doing.

While millions of people face acute hunger in the harsh winter of this landlocked country, no relief has come from the United States or the OIC. Malala’s otherwise resonant and provocative note is missing this time around. Perhaps she cannot stay away from the power centers in Pakistan that have chosen to side with the Taliban. Is Pakistan jealous of Afghanistan?

Snow-capped, war-torn Afghanistan has always had a natural claim to be the Shangri La of this region – a potential seat of the UN headquarters.

But the Shangri La fell victim to the forces of evil. He was hurt and wronged. But now he is testing our sensibilities in the cruellest way possible. And the time has come when the countries neighboring Afghanistan must act without wasting a single moment. Activism is an informed, unprivileged club choice of power aspirants.

In the second week of December 2021, India returned a Kam Air flight which evacuated some Indian and Afghan nationals from Kabul with life-saving drugs and Covid-19 vaccines. It was India’s second humanitarian aid to Afghanistan since the Taliban takeover led to a rapid change in protocols due to UN sanctions.

But India’s efforts to transport 50,000 tonnes of wheat are still in vain due to Pakistan’s non-cooperation. The severance of trade relations between India and Pakistan 3 years ago destroyed the systems and processes of transporting goods from India to Afghanistan via the Wagah border and Pakistan. This is the shortest and easiest route to send goods to Afghanistan from India. Despite its commitment to put the systems back in place, Pakistan backtracked. Now Iran has offered to help India transport the wheat to Afghanistan.

When a globe-trotting socialite politician Imran Khan became Prime Minister of Pakistan, the world expected the country to embark on the path of pragmatism and modern thinking. But that doesn’t seem to be the case.

During the first 15 days of the New Year, Chinese Foreign Minister Wang Yi visited five countries. True to a three-decade tradition, the Chinese foreign minister spent his New Year in Africa. During a five-country tour, he visited Eritrea, Kenya, Comoros, Maldives and Sri Lanka, where he said no third country should interfere in relations between Sri Lanka and China.

China was the first country to accept the Taliban regime in Afghanistan and Sri Lanka is another country in the region where a food crisis is spiraling out of control.

If China does not immediately respond to the humanitarian crisis in Afghanistan, it will be impossible to defend its commitments with the Taliban.

Ideas like China’s interest in Afghanistan because of its $3 trillion mineral reserves, much of which is lithium and rare earths, will gain traction. The perception that China favors the Taliban because of its weaknesses in Xinxiang will be reinforced. (API Service)