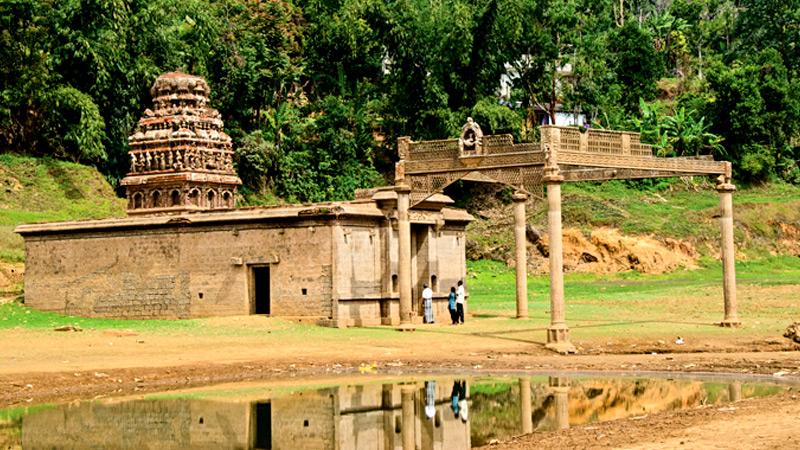 The Kathireshan Hindu temple maintained by the villagers when it resurfaced in the Maussakele reservoir bed is a symbol of communal harmony.

The famous Hindu temple resurfacing in the dry reservoir bed of Maussakele drew me to the once grand old town of Maskeliya and now a dusty town in an arid landscape.

For someone who hunts for monuments and forgotten ruins across the dry reservoir beds in the central hills, all that Maskeliya Reservoir had to offer fascinated me.

When my son told me about the Sri Kathireshan Hindu temple on the reservoir bed at Maussakele, I was very excited to visit it. People visited this temple after it resurfaced in the lower water level of the reservoir due to the prolonged drought in the area. This is one of the temples we revisited on our recent visit to Maskeliya. 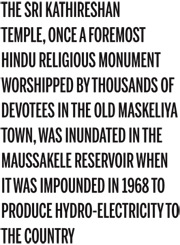 Although newspaper articles alerted us to the drop in water levels of the reservoirs, this is nothing new to us as we revisited the parched and cracked landscape of the reservoir bed and found the most exquisitely constructed temple in stone.

It was a fairly small temple. As the sun’s rays fell on it, the brick and cement Gopuram with the damaged carvings shone, while the cloudless blue sky warmed the granite slabs.

Legend has it that the temple was built in the ancient city of Maskeliya by Hindu families who came from southern India and settled there during the colonial period. The temple had been built in 1917 under the guidance of sculptors from South India.

However, not much is known about the builders of this 19th century Murugan temple called Sri Kathireshan Hindu temple. It has a Gopuram in the middle of the flat roof constructed with stone slabs, and below is the sacred stone chamber where the statues of the gods were placed, and is considerably smaller than the rest of the building. While walking quietly inside, between the granite columns, we came across spectacular ruins of stone carvings. Stone carved statues of Skanda or Murugan in the stone covered chamber and other stone carved pillars with various floral designs and mythical animal figures adorned the square pillars of the temple.

Observing intricately carved floral designs on the stone door frames, we saw no vandalism caused to the temple, despite being underwater most of the time. However, some stone slabs laid on the ground had been removed in some places and large amounts of alluvium deposited in the temple. Nevertheless, Hindu and Buddhist devotees faithfully worshiped the temple. 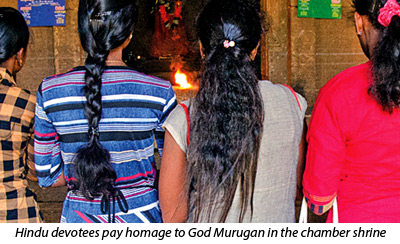 It is a unique feature that the stone structure of the temple remains intact even after being under water for more than 50 years. I realized that these carved pillars resemble those of the Gadaladeniya Vihara in Kandy. Coming out of the temple, we visited the concrete structure which had been badly damaged by water and was in ruins in front of the temple.

At the ruined Kovil, we met a middle-aged Hindu, Kengan, who officiated as a Kovil priest and held Poojas at the Kovil daily. Many Hindu and Buddhist devotees come with Poojas to offer to God Murugan or Skanda when he has resurfaced during drought.

It is believed that there was a gate in front of the temple before it was submerged in water, as seen in the four large ruined concrete columns that stood with their damaged panels on the structure of the temple representing religious and secular scenes, Hindu gods and animal sculptures. .

The exquisite panel on the top depicts God Skanda with his vehicle, the peacock. A row of small mythical animals is also visible covered with remarkable cement carvings although the figures have been worn down over time.

The Sri Kathireshan Temple, once a prominent Hindu religious monument revered by thousands of worshipers in the old town of Maskeliya, was flooded in the Maussakele Reservoir when it was seized in 1968 to generate hydroelectricity in the country.

When the Sri Pada season begins, most pilgrims passing through the town of Maskeliya crowd into the Maussakele reservoir bed to quietly gaze at the religious monuments, including the Sri Kathireshan Temple.

Maskeliya symbolizes the temple with mythology, artistic perfection and the message of communal harmony. Although it is underwater most of the time in a year, decayed by the elements, it cannot be preserved for the future and is entirely lost to us. However, Buddhists and Hindus along with other minorities worship at the temple when it resurfaces in the falling water level of the reservoir during drought.