António Horta-Osório has resigned as chairman of Credit Suisse after repeated breaches of coronavirus quarantine rules dealt a fatal blow to his promise to restore the reputation of the scandal-hit bank.

The 57-year-old’s exit after less than a year follows a board investigation which found the former chief executive of Lloyds Banking Group breached quarantine rules, including during a trip to London last year to watch the Wimbledon tennis final.

The investigation, which was finalized last week, also cited an incident in which Horta-Osório used the bank’s private jet for a personal vacation in the Maldives, according to a person familiar with its findings.

Horta-Osório held talks with the bank’s board, led by independent lead director Severin Schwan, over the weekend about his decision to step down, according to people briefed on the talks.

“I regret that a number of my personal actions caused difficulties for the bank and compromised my ability to represent the bank internally and externally,” Horta-Osório said. “So I believe my resignation is in the interest of the bank and its stakeholders at this crucial time.”

The abrupt departure is a serious embarrassment for Credit Suisse, which has recruited the Portuguese banker to help reset its strategy after scandals involving Greensill Capital and family office Archegos damaged the bank’s reputation for risk management and raised questions about his leadership.

Axel Lehmann, former chief operating officer and head of Swiss operations at UBS, has been named the bank’s new president, Credit Suisse said. He joined the bank’s board of directors in October.

Andrew Coombs, an analyst at Citigroup, said that “[Horta-Osório] will go down as a short footnote in Credit Suisse’s long history,” but added that “his departure leaves Credit Suisse with a lack of strong people at the top and leadership questions will likely be raised.”

Lehmann said on Monday he intended to stick to the group’s new strategy and did not foresee any big changes within the management ranks. 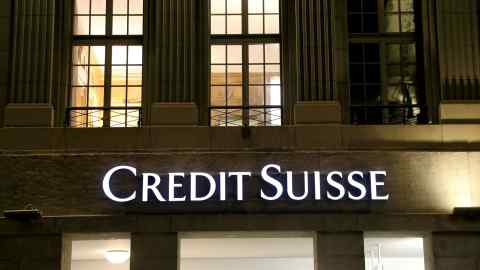 “We are in constant dialogue with shareholders,” Lehmann told the Financial Times. “I am very confident that the shareholders will accept the decision of Antonio and the board of directors and will provide the management team with the necessary support it needs.”

Credit Suisse’s stock fell 2.3% on Monday, leaving it down nearly a quarter in the past 12 months amid a broader stock market boom.

Swiss proxy investment adviser Ethos Foundation, which represents Swiss pension funds which own around 5% of the bank’s shares, welcomed the resignation, with its chief executive Vincent Kaufmann saying the chairman must ensure that “their activities and attitude are beyond reproach”.

However, the exit of Horta-Osório, who had won plaudits during his decade at the helm of Lloyds, failed to win universal shareholder support. David Herro, vice president of US asset manager Harris Associates, one of the bank’s top five investors, said he was “speechless”.

“We are very disappointed to see the departure of António Horta-Osório from Credit Suisse given his talents and the restructuring plan he initiated there,” he added. “We remain hopeful that with the various management improvements. . . along with the timely execution of this new strategic plan, that Credit Suisse will not only be strengthened but revitalized.”

Horta-Osório broke UK quarantine rules when he flew to London and then watched the Wimbledon tennis finals on July 10 and 11. At the time, Switzerland was on the UK’s ‘orange’ list of countries facing restrictions, with travelers forced to self-isolate for 10 days on arrival.

In a later incident, Horta-Osório broke Swiss Covid-19 rules when he entered and left the country within three days. He had traveled from London to Zurich on November 28, shortly after a 10-day quarantine requirement was introduced in Switzerland following the identification of the Omicron coronavirus variant.

Horta-Osório apologized for the “mistake” and called the breach “unintentional”.

However, Swiss newspaper Blick reported that he initially requested exemptions from the local canton and the federal government, but was told he would not receive any special treatment and would have to self-isolate for the full 10 days. .

According to someone close to Horta-Osório, the former president used the bank’s business jet to stop over in the Maldives following a business trip to Asia.

Since becoming president, Horta-Osório, who was knighted in honor of Queen Elizabeth’s birthday last June, has spoken of being “committed to developing a culture of personal responsibility and accountability” to the bank.