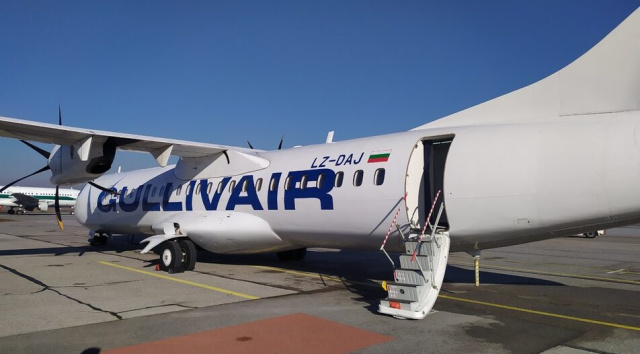 This was reported to TravelNews by officials at Sofia Airport. A check of the Airline companyrevealed that online tickets are no longer sold for the three destinations. The last flight to Burgas took place at the end of May, and to Skopje and Tirana at the end of June.

GullivAir has already returned the three small ATR 72 planes to the lessor because it cannot pay its fee, airport officials said. For this reason, the flights announced earlier this year from Sofia to Ruse, to Bucharest, Thessaloniki, from Burgas to Belgrade and other destinations in the Balkans will probably not be realized. The manager and owner of GullivAir Yanko Ivanov did not comment on the reason for the suspension of lines and the return of planes.

Sofia Airport’s “SOF Connect” concessionaire had no official comment either. The suspension of flights is likely due to low interest and lack of passengers, the tourism industry explained. According to experts, the three countries – Bulgaria, North Macedonia and Albania – promised to support regular lines, but in reality this was not implemented. Last week, the Ministry of Transport allocated BGN 500,000 to GullivAirbut it was only a help Bulgarian air carriers affected by the Covid pandemic.

Again, there is currently no flight connection between Sofia, Skopje and Tirana. Only “Bulgaria Air” operates from Sofia to Burgas during the summer season. Initially, GullivAir flew daily to Skopje and Burgas. Then reduce the frequency. It operated four times a week to Tirana – Monday, Tuesday, Thursday and Saturday. The line to the Albanian capital was mainly used by tour operators offering hotel packages for holidays and excursions along the Adriatic coast.

GullivAir also planned to launch a regular direct line to the United States this summer. Nope flights have been announced at this stage. It has had permits since last year to operate in New York from the US Department of Transportation. After that, it took them to Canada, Thailand, Maldives, India. “For the moment, we do not have an exact date from which flights in the United States will leave“, Janko Ivanov recently told TravelNews.

GullivAir also has three Airbus A330-200s that can operate long-haul flights. I currently do charters with them. During the pandemic, he mainly carried out those from Sofia and Bucharest to Malé (Maldives), Punta Cana (Dominican Republic), Sri Lanka and the Seychelles, which were organized by tour operators.

GullivAir was registered in 2016 as “Top Jets”, changed to this in mid-2020, a reference to the commercial register indicates. It belongs to the company “Air Logistics”, which is the sole property of Yanko Ivanov.

Email us at editors@novinite.com