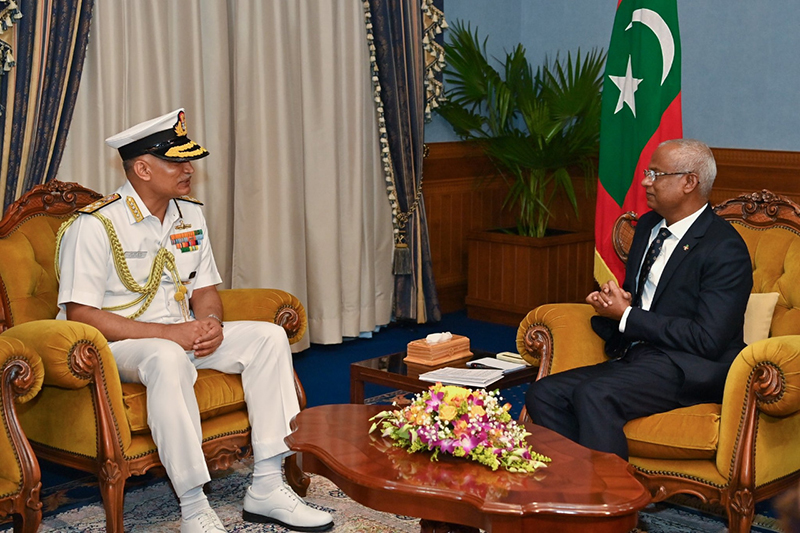 New Delhi: On his first overseas visit after assuming the post of Chief of Naval Staff (CNS), Admiral R Hari Kumar visited the Maldives from 18-20 April 22.

Adm R Hari Kumar hosted a reception aboard the Indian Navy ship Sutlej on 18 April 22, in honor of the Maldives Minister of Defense and the leadership of the Maldives National Defense Forces (MNDF).

INS Sutlej, is currently deployed to the Maldives to undertake joint hydrographic surveys under the Memorandum of Understanding on Hydrographic Cooperation.

The CNS unveiled the first navigational chart produced jointly by India and the Maldives and handed over hydrographic equipment to consolidate the organic capabilities of the MNDF.

CNS also visited the maritime assets of MNDF and commended the joint efforts of MNDF and Indian Navy personnel in maintaining the value of these assets.

He showcased a consignment of engineering equipment for the continued sustenance of the MNDF vessels, thus reaffirming India’s commitment to the capacity building efforts of the MNDF.

During the pandemic period, the two countries have worked very closely, through Mission SAGAR and Op Samudra Setu, on resource mobilization and movement of personnel.

The easing of pandemic-related travel restrictions has witnessed several high-level interactions between the two countries over the past few months.

The Defense Minister of the Maldives was the chief guest at the Indian Naval Academy Passing Out Parade in November 2021 and Colonel Ibrahim Hilmy, Commander of the Maldives Coast Guard, led the Maldivian delegation to MILAN- 2022 hosted by India in Visakhapatnam in February 2022.

India and the Maldives share common perspectives on maritime security issues in the Indian Ocean and have worked closely in several bilateral, mini-lateral and multilateral forums such as the Indian Ocean Naval Symposium and the Colombo SecurityConclave.

Guided by the “Five S” vision of Sammaan (Respect), Samvaad – (Dialogue), Sahyog – (Cooperation), Shanti – (Peace) and Samriddhi – (Prosperity), articulated by the Prime Minister of India, the The CNS’s visit further cemented the strong and long-standing bilateral relations between two close maritime neighbors and also identified new avenues to expand the scope of bilateral cooperation in the field of defense and the maritime domain.