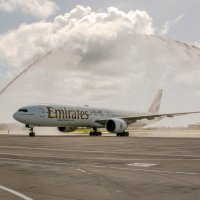 May 27, 2022 – Velana International Airport honors 35 years of Emirates Airline flying to the Maldives, the sunny side of life. A special water salute was performed to celebrate this event.

Emirates is a major airline that has made a substantial contribution to the tourism and trade industries of the Maldives. On May 27, 1987, Emirates Airline began operations using a B727 aircraft. Originally, Emirates operated two weekly flights with a total capacity of 189 seats. Currently, Emirates operates five daily flights with a capacity of 360 passengers on the Boeing 777-300ER and transports over 600,000 people and 20,000 tonnes of cargo to the Maldives annually.

With its global network of over 160 destinations, Emirates has played an important role in the Maldives with its massive passenger and cargo traffic.

“wrote Emirates celebrates 35 years of flying to the Maldives”