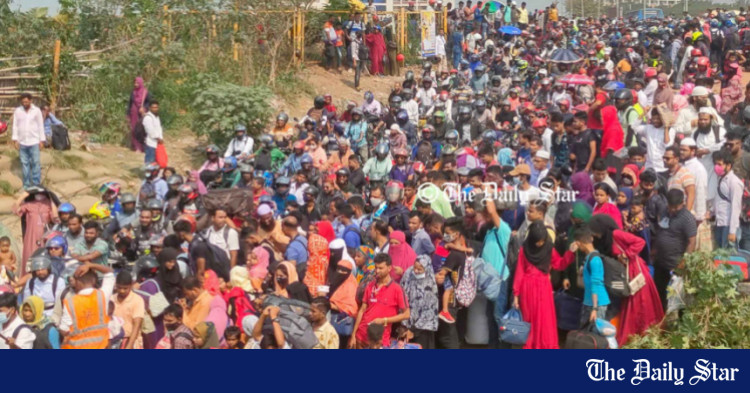 River routes from Shimulia to Munshiganj, Banglabazar to Madaripur and Majhikandi to Shariatpur have seen huge crowds of people confined to their homes since this morning.

There has been increased pressure from private cars and motorbikes, our correspondent in Munshiganj reports.

On the other hand, the launch and speedboat terminals saw an influx of passengers at Shimulia Ghat when the report was filed around 10 a.m.

There are 10 ferries, 85 launches and 155 speedboats operating on this route.

About 500 private vehicles and thousands of motorcycles are waiting to cross the river in the Shimulia ghat area.

Meanwhile, the launch terminal is also full of passengers. They wait for hours to cross the river. Many people fell ill under the scorching sun for hours while fasting. Water vessels have also been seen carrying more passengers than their capacity.

About 500 private vehicles were waiting at the Shimulia terminal to cross the river at around 9:30 a.m., said Faisal Ahmed, BIWTC’s Shimulia Ghat (trade) manager, adding that there were also thousands of motorbikes waiting for the ferry.

“We are doing everything we can to keep the situation under control,” he said.