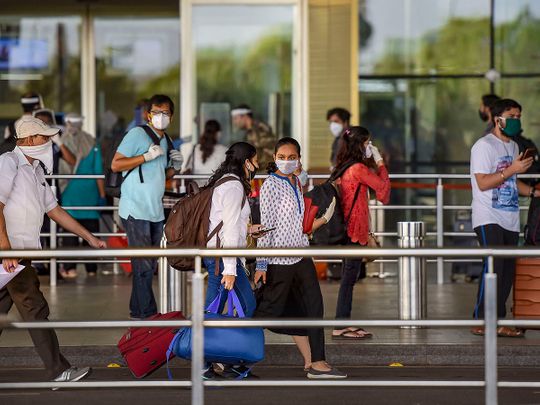 After a nearly two-year suspension, India has reinstated all categories of tourist visas for foreign nationals. The United Arab Emirates, which contributes one of the highest VFR (Visiting Friends and Relatives) traffic to India, is also a “premium” source market for Indian hotels and airlines. “At the end of the day, it’s a demand and supply formula,” Brar said.

The government official said Air Suvidha – India’s travel registration portal introduced during the pandemic – will likely continue to be mandatory for passengers flying into the country. “All countries right now and all destinations are looking at how they can make sure people are safe,” he added. “I think that remains everyone’s priority.”

India and the UAE have recently implemented CEPA (Comprehensive Economic Partnership Agreement) which allows duty-free movement between countries. The airline industry, however, is not part of the deal, but will be one of the biggest beneficiaries of the movement of goods.

Airline officials in the UAE have frequently raised the possibility of introducing more flights on the route given the demand. The airline Emirates, which operates 170 weekly flights to India, has a 95% load factor on the route.

During a press conference recently, the commercial director of the Dubai airline, Adnan Kazim, said that there is a possibility of increasing flights between the countries. “India’s travel pattern today is quite limited compared to the demand India can offer. The demand exceeds the current capacity offered.”

UAE-India ticket prices returned to normal after the long Eid break earlier this month, the first for residents since the easing of travel restrictions. A ticket from Delhi to Dubai currently costs only around Dh643, compared to Dh1,000-1,500 last week. Flying from Mumbai could be more expensive, with most flights charging upwards of Dh800. Fares have not seen a drastic drop from Kochi, with one-way tickets to Dubai costing Dh1,500. Traveling to Bangalore has far more reasonable fares, with most airlines changing below Dh800.

Travel agents have pointed out that while airfares have risen above peak Eid levels, fares will see a further increase in July when the summer holidays begin at schools. During this period, a flight from Dubai to Delhi can cost between 800 and 1,500 Dh. Some destinations will cost even more; an Emirates flight to Kochi on July 1 costs Dh3,750.

India, which received around 18 million visitors in 2019, may be able to return to that mark this year, Brar said. “There have been some percentage jumps in the number of people interested in traveling to India – I see no reason why we shouldn’t exceed the pre-Covid figure and even exceed it.”

After its long absence from the UAE market, India will have its work cut out as other tourist destinations such as the Maldives, Seychelles and Georgia have really stepped up their marketing efforts during the pandemic. Brar believes that unlike the Maldives and other destinations, India offers the whole package of culture, heritage, food and shopping. “Once can plan a full and complete vacation in India which is just amazing.”