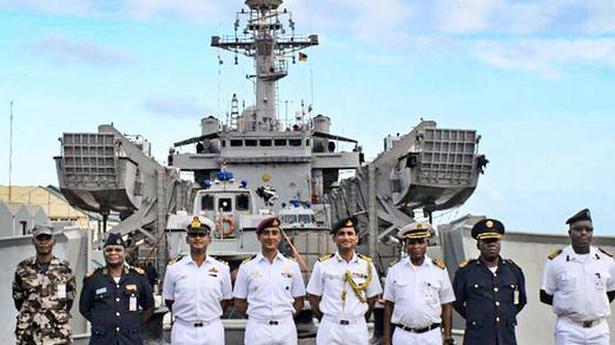 India has handed over two Rapid Interception Devices (FICs) and other self-defense equipment to Mozambique to help build capacity as the Central African nation battles growing terrorist threats. Warship INS Kesari entered the port of Maputo in Mozambique to deliver 500 tons of food aid as well as defense equipment, as part of the eighth edition of the Sagar mission by the navy to help friendly foreign countries in the region.

The deployments were carried out in solidarity with India’s extended maritime neighborhood and underline the importance India places on these special relations, the navy said on Sunday. 500 tons of food aid have been dispatched by INS Kesari to support the efforts of the Government of Mozambique to deal with the ongoing drought and the attendant challenges of the pandemic, he said.

“India also remains committed to supporting efforts to build the capacity of Mozambique’s armed forces. To this end INS Kesari is carrying two rapid interception devices and self-defense equipment to be handed over to the Mozambican armed forces, ”the navy said.

The equipment will come in handy as Mozambique is affected by terrorism in its north, a defense official said. The Islamic State terrorist group, also known as Daesh, and its affiliates quickly spread to Central Africa.

A recent United Nations report on the Daesh threat had sounded the alarm on the terrorist group’s rapid expansion in Central Africa and in particular in northern Mozambique. For example, in August 2020, Daesh-affiliated Ahl al-Sunnah wa al Jamma’ah (ASWJ) fighters briefly captured the strategic port of Mocimboa da Praia in the northernmost province of Cabo Delgado in Mozambique, near the Tanzanian border.

In recent times, capacity building has been a major focus area in India’s engagements with Indian Ocean riparian states, with materials and equipment provided to many countries. It also helps address common maritime challenges in the region. This was a major topic of discussion at the second edition of the Goa Maritime Conclave last month which brings together countries from the Indian Ocean region.

INS Kesari, a Landing Ship Tank (Large) undertook a similar mission in May-June 2020 to provide humanitarian and medical assistance to the Maldives, Mauritius, the Seychelles, Madagascar and the Comoros, including the deployment of assistance teams Indian Navy Medical Officer in several locations. Since May 2020, ships have been deployed to 15 friendly countries as part of SAGAR missions, the Navy said.

These deployments, spanning 215 days at sea, have provided cumulative assistance of over 3,000 tonnes of food aid, over 300 tonnes of liquid medical oxygen (OMT), 900 oxygen concentrators and 20 ISO containers. . The Navy’s cumulative efforts to achieve this amount to 215 days of deployment at sea, with ships traversing nearly 40,000 nm and an investment of nearly a million man-hours, the Navy said.

Separately, INS Sudarshini, which is deployed to the Gulf region as part of the Navy’s efforts to familiarize friendly Marines with various facets of operations and training aboard sailing training platforms, visited Port Sahid Bahonar, Bandar Abbas in Iran on December 22 during a three-day visit.

Iranian Navy trainee officers assigned to undergo sailing training visited the ship for a ship familiarization tour. “Practical knowledge on subjects such as seamanship, sails layout, rope work and the technicalities of sailing training were shared. Practical knowledge and practical experience of rigging the sails on both sides was also imparted during this visit, ”the Navy added.