HCM CITY — A sense of caution dampens excitement as stakeholders prepare for the full resumption of international tourism on March 15. Will Việt Nam’s quarantine rules be a deterrent?

Concern plagues travel agencies, hoteliers, tourism destination managers and other stakeholders as they prepare for the return of international visitors, spruce up their premises, hire and train new staff and more.

All companies in the tourism industry were enthusiastically preparing for the return of international tourists, said Nguyễn Ngọc An, deputy general manager of Fiditour-Vietluxtour.

“It is a positive sign for the recovery of the tourism industry which is so dependent on the international market,” he added.

With international tourism frozen, domestic travel revenue cannot compensate for losses incurred due to the pandemic and the resulting border closures.

A said News from Việt Nam that his company had prepared personnel, facilities and travel products and services, ensuring that everything would be in order to welcome foreign tourists to Việt Nam.

Companies are calling for workers to return and have launched retraining programs as many left the industry after COVID-19 halted travel.

“If we start marketing in overseas markets from now on, we can attract international travelers during the peak travel season from September until the end of the year,” An said.

Trần Xuân Thảo, director of the War Remnants Museum in Ho Chi Minh City, said they had renovated the premises to receive international visitors from mid-March.

“We are delighted to see international tourist groups visiting the museum after the borders have been closed for so long,” she said.

Staff have been trained in professional skills and given guidance on pandemic prevention and control in tourist destinations.

“There is no doubt that a full recovery will take time and we hope the museum will serve large groups of international travelers in the second half of this year,” she said.

Before the pandemic, the museum welcomed 1.3 million visitors a year, 80% of whom were foreigners.

Vũ Thị Thanh Hiền, deputy manager of Grand Hotel Saigon in District 1, said they are all set to welcome international travelers from mid-March.

The hotel had suffered significant losses since the country restricted international tourist arrivals to combat COVID-19. Domestic guests were now the main source of income, she said. 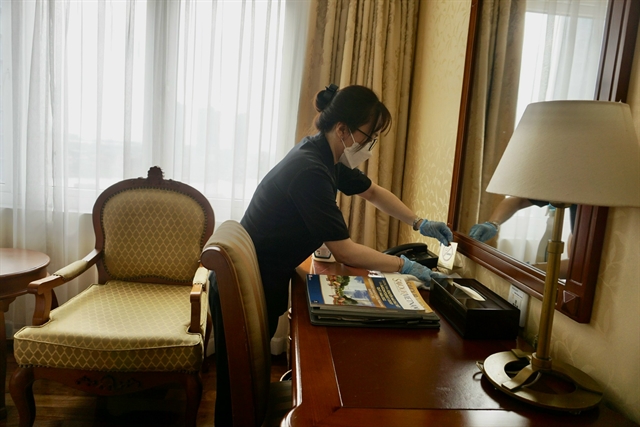 A maid at the Grand Hotel Saigon in District 1 prepares the rooms to receive guests. — Photo VNS Thu Hằng

Amid high expectations, many tour operators are also worried that strict entry measures with multiple testing and quarantine requirements will make it harder for them to get their business going again.

According to a new proposal from the Ministry of Health, it will be compulsory for tourists to stay at their place of accommodation for the first 24 hours after entry. They are also encouraged to extend the stay on arrival to 72 hours and undergo two COVID-19 tests – one on the day of entry and another on the third day.

If they wish to leave their place of accommodation after the first day, they will need to be tested for COVID-19 every day until the end of the 72 hour period.

“If quarantine requirements are removed for vaccinated travelers and consistent policies are issued for domestic and international tourists, the tourism sector can take advantage of opportunities to compete with other countries,” Mẫn said.

Stricter travel rules would, however, create obstacles to recovery for the hard-hit tourism industry, hampering its ability to adjust to new normal conditions, he said.

One from Fiditour-Vietluxtour said more countries had started to open their borders with relaxed entry and quarantine requirements for vaccinated travellers.

The Health Ministry’s proposal would make it difficult for international tourism to succeed, as visitors would not want to face the hassle of multiple tests and a 72-hour hotel quarantine, An said, adding that he would not wouldn’t have much time left to travel over seven days. to 15-day circuits, not to mention the expenses incurred.

Initially, travel agencies expected to attract tourists from certain markets like neighboring ASEAN members and a few other countries to which commercial flights had resumed, he added.

Võ Anh Tài, deputy general manager of Saigontourist Group, a leading travel agency in the country, said News from Việt Nam that precise and clear travel rules and guidelines for the reception of international travelers should be developed quickly.

According to Tài, it takes longer to plan and market products and services for foreign travelers than for domestic travelers. Therefore, it is only when procedures are clarified and implementation guidelines are published that companies will be confident to carry out their plans and work with international partners.

Many tour operators in HCM City are also banking on overseas tours as international flights resume from mid-March.

Vietravel took 180 guests on a charter flight to India from Hà Nội in late February and a party of 45 to Dubai from HCM City earlier this month. These are the first two overseas tours the company has operated this year.

Saigontourist had resumed tours to the United States, Thailand, Dubai and the Maldives and planned to expand to other markets.

The number of bookings for overseas tours has increased and favored markets include the United States, Japan, South Korea, Australia and Europe, according to travel agencies.

One from Fiditour-Vietluxtour said demand from Vietnamese to go abroad was strong after two years of border closures.

“More and more countries in the region, such as Thailand, Indonesia and Cambodia, are gradually resuming tourism activities. To be competitive and assert its position on the international tourism map, Việt Nam’s tourism industry must promote itself using various marketing channels. This requires coordination between many actors, including government agencies, local authorities, industry-related organizations and businesses,” said Mauro Gasparotti, director of Savills Hotels APAC.

Recent positive signals (such as the easing of travel and border restrictions) have led many hotel owners and management teams to restart operations, Gasparotti said.

Recruitment, training and marketing activities are undertaken to recapture the international market. In terms of new developments, construction has accelerated and pre-opening activities have been carried out diligently, he said.

“Hotels should leverage their global networks and well-established distribution systems to promote Việt Nam’s tourism industry. This is an essential step in welcoming international guests back and promoting the country as an attractive and safe destination,” he added.

Nguyễn Thị Ánh Hoa, Director of HCM City Tourism Department, said News from Việt Nam that the city’s tourism industry was focusing its efforts on promoting the city as a vibrant and safe tourist destination on national and international media platforms.

A number of information and marketing plans as well as preferential policies have been prepared for the return of international travelers, especially MICE tourists and other large groups, she said.