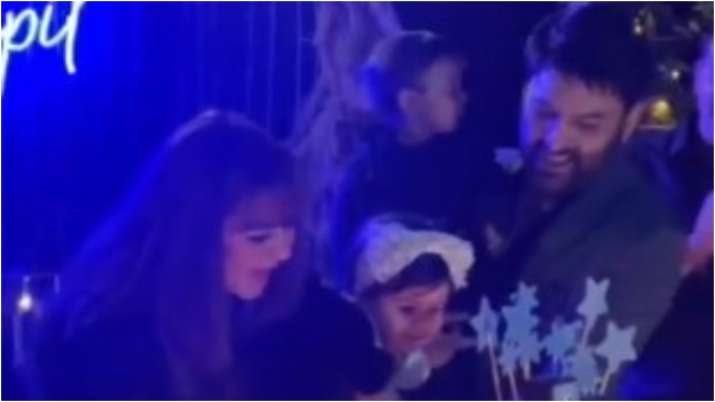 “Comedy King” Kapil Sharma recently turned a year older. He also threw a special party in honor of his special day and Kapil shared some glimpses from the time on social media. He is joined by Ginni Chatrath and their two children Trishaan and Anayra for the birthday party. Kapil holds Trishaan in his arms while Anayra clings to mom Ginni.

Anayra also sings the song “Happy Birthday” for Kapil as she is handed the microphone. She mumbles a few lines for the dad and Kapil seems delighted surrounded by his family on this special day. Anayra even cuts the cake. The priceless moments were shared by Kapil on Instagram and they are worth watching.

Kapil will also begin his tour of the United States and Canada with cast members of The Kapil Sharma Show. Shows will begin in mid-June and continue through early July. More recently, Kapil also announced his tour of Australia, the dates of which will be announced soon.

Kapil has also been filming for his next film from director Nandita Das. He plays a food delivery boy in it and the film also stars Shahana Goswami. Nandita, who has directed critically acclaimed films like Firaaq and Manto, said, “The film tries to make visible what is hidden in plain sight.”

Producer Sajid Nadiadwala has revealed he will soon announce a film starring Kapil. A Kapil biopic is also in the works, starring famed Fukrey director Mrighdeep Singh Lamba. Mahaveer Jain will produce the film under the Lyca Productions banner.

Kapil currently hosts The Kapil Sharma Show. He also made a foray into film with the Abbas Mustan-directed comedy Kis Kisko Pyaar Karoon in 2015 and later starred in the historical drama Firangi.

Earlier this year, Kapil also made his OTT debut with his Netflix special I’m Not Done Yet.