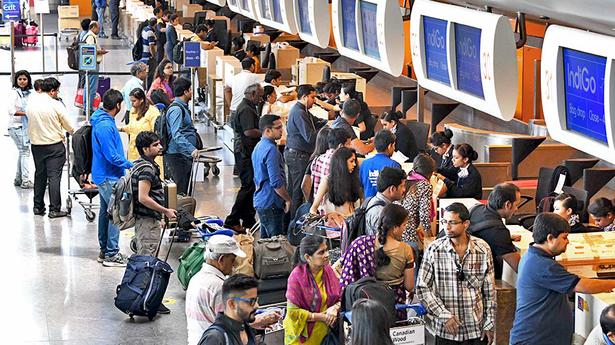 Karan Kapur*, 41, began planning a trip to the United States last October so he could visit his cousins ​​during his son’s summer vacation this year, but the lack of an appointment from visa means he has to wait until February next year.

“I was given a dummy appointment for 30th and 31st October when I applied in February this year. But last week I received an email telling me that the appointments were cancelled, with no information on whether I will need to reapply.It was also impossible to get information from the website, but following an update from the embassy on social media, I tried again after a few days and I now have visa appointments in February 2023,” Kapur said by phone.

Although there has been an increase in demand for international travel since the government removed restrictions in March, the unavailability of appointment slots for visa interviews as well as the long processing time for visa applications visa have meant that some of the favorite destinations in the West such as the United States and many European countries such as the United Kingdom, France, Italy, Denmark and Greece are out of reach for many planning a vacation. been abroad after a two-year hiatus.

The U.S. Embassy announced last week that in-person visa appointments would resume in September 2022 and that previously scheduled placeholders were cancelled.

According to information from tour operators, visa processing for the UK could take 9-10 weeks, for Greece 30-60 days, and for France it may take until the end of June if the ‘we apply from cities like Delhi.

But there are countries that don’t have a long waiting period. Switzerland takes about seven to 10 days to process visa applications, Spain takes three to four days if applying from Mumbai, as does France.

“As a result, many are forced to postpone their departure or travel to destinations where the wait for the visa is not very long,” says Daniel D’Souza, President and Country Head, Vacations, SOTC Travel.

The visa chaos comes at a time when international travel has grown rapidly. According to the ICRA rating agency, it reached 72% of the pre-COVID level in May.

D’Souza says his business also saw 30-35% monthly growth in bookings and May sales were up to 65% of pre-pandemic levels.

“There has been an unprecedented surge in demand for outbound travel from India to many parts of the world this summer. Given the extremely high pent-up demand, this was expected with the opening of international borders , the easing of travel restrictions and the resumption of scheduled international flights from India in March 2022,” a VFS Global spokesperson said.

VFS sees around 20,000 applications from India in a day, which is close to the volumes seen during the pre-pandemic peak season.

To meet travel demand, Thomas Cook and its group company SOTC travel are enticing customers with attractive packages to short-haul destinations that do not require visas such as Indonesia or the Seychelles, or offering visas to arrival like Maldives, Mauritius and Thailand, or those like Dubai, Singapore, Malaysia, Vietnam, Cambodia, Australia that offer e-visa. Then there are also options like Turkey and Egypt that have a hassle-free visa process.