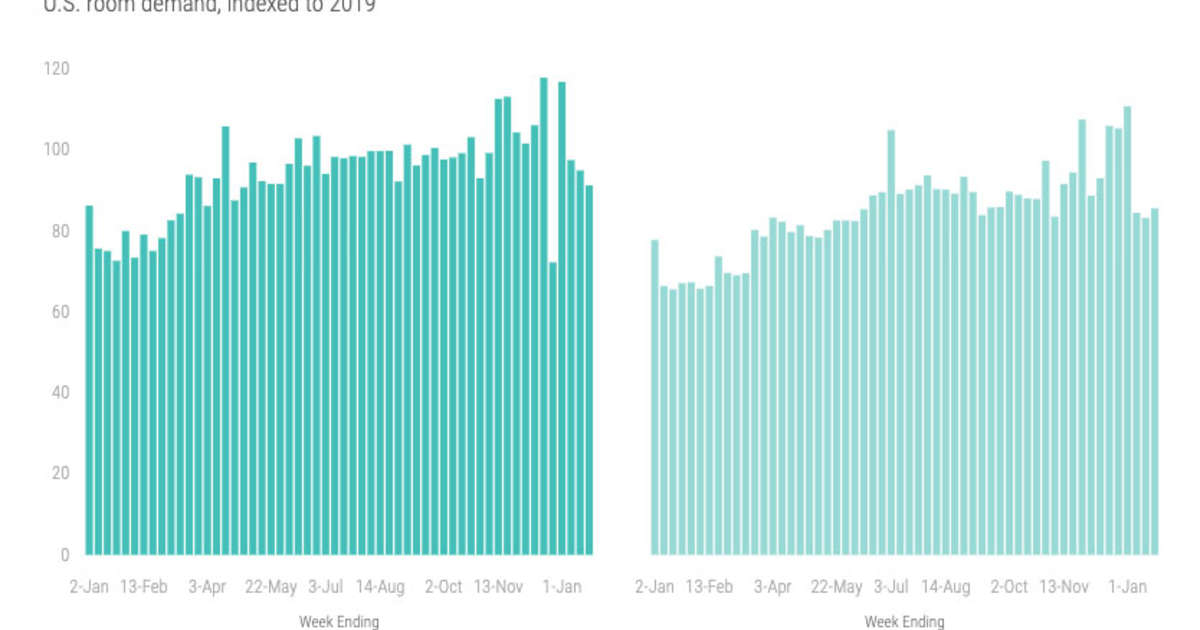 For a third consecutive week, the hotel occupancy rate in the United States remained weak, with the occupancy rate from January 16 to 22 remaining practically stable (-0.1 percentage point) at 48.7%. Demand for rooms fell by 13,000 nights week over week but remained above 18 million and increased relative to 2019 with an index of 87.2, up 0.5 points week over week. The average daily rate (ADR) rose for a second week, but by just 0.2%, with the index through 2019 rising to 98.6. Revenue per available room (RevPAR) also increased slightly (+0.1%) with the index at 2019 (82.9) the highest in the last three weeks.

While there is no doubt that Omicron had an impact on travel over the month, we see reason for optimism. The percentage of hotels with low weekly occupancy (less than 30%) has not deteriorated to levels seen a year ago and has remained somewhat stable over the past two weeks. Three weeks ago, nearly a quarter of all US hotels had an occupancy rate below 30%, but the most recent week the percentage was 18%.

We’ve seen the same trend in urban areas, dropping from 33% three weeks ago to 24% more recently. This trend makes sense because January isn’t a busy leisure month, and it’s a strong leisure presence that has driven demand since COVID began. As the month progresses, leisure travel resumes. This can be seen in the performance of resort hotels which are beginning to recover.

Airport hotels have done better over the past three weeks with an average occupancy of 55.3%. The best performing airport hotels are in Miami airports (81%), followed by Hollywood FL (76%). The cities most likely to be affected by winter weather also posted remarkable occupancy levels in the airport submarket: Denver Airport/East (72%), LaGuardia/Queens North (72%) and JFK/ Jamaica (71%). Not surprisingly given the dearth of business and group travel, the worst performing hotels are in urban areas where occupancy has averaged 40% over the past three weeks. Large city hotels (over 300 rooms) saw even lower occupancy (34%). Small urban hotels, with less than 75 rooms, experienced better occupancy (51%) with medium-sized establishments (between 75 and 299 rooms) at 43%.

Hawaii had the highest occupancy rate of any state (66%), followed by Vermont (66%) and Florida (64%). Florida’s occupancy rate rose nearly two points from the previous week, but remained about 15% below its 2019 level. Florida Keys continued to have the highest occupancy rate high of all markets (87%), joining eight other Florida markets in the top 10 for highest weekly occupancy. Overall, six of Florida’s 13 markets saw higher demand last week than the comparable week of 2019. In the U.S., 47 markets reported room demand that topped 2019 this week, compared to 58 last week. previous week.

Weekday occupancy (47%) improved for the second week in a row, thanks to higher occupancy on Sundays due to the Martin Luther King Jr. holiday. Otherwise, weekday occupancy would have been stable by a week to week. However, we saw a slight improvement in occupancy on Tuesday and Wednesday. Weekend occupancy fell from 58% a week ago to 53% this week, and the index through 2019 (88) was the lowest in four weeks.

While the ADR showed little movement, there were dramatic differences. Weekday ADR was up 3.5% week-over-week, with more than half of the growth coming from MLK on Sunday. Solid growth was also seen on Tuesday and Wednesday, when the ADR increased by nearly 3% each day. Weekend ADR fell 5% after gaining 8% over the MLK weekend. Despite the decline, weekend ADR was 6% higher than the comparable period of 2019 and has been above 2019 levels for 35 consecutive weeks. On an inflation-adjusted basis, the ADR for the weekend is pegged at 95, the third consecutive week below 2019 levels.

For a second consecutive week, 73% of the 166 markets defined by the STR were classified as being in “Recovery” (RevPAR indexed to 2019 between 80 and 100) or “Peak” (RevPAR indexed to 2019 greater than 100). On an inflation-adjusted basis, 64% of markets fell into either of these two categories. The Florida Keys had the highest weekly index (162) while San Francisco had the lowest (33). San Francisco and San José were the only two markets in the “Depression” category (RevPAR indexed to 2019 below 50). On a 28-day rolling total basis, 55% of the markets were at “Peak” RevPAR, the lowest in the last 16 weeks, and 33% were in “Recovery.” Taking inflation into account, 43% of the markets were at “Peak” RevPAR over the last 28 days with still 37% in “Recovery.”

Outside the United States

Global occupancy, excluding the United States, fell for the third consecutive week to 39.1%, the lowest level in 37 weeks. Only six countries recorded an occupancy rate above 60%, mainly destinations: Curaco, the Dominican Republic, Barbados and the Maldives. The UAE and Singapore were the only two non-destination locations with similar occupancy, as the UAE continues to strengthen due to Expo 2020 in Dubai, and Singapore sees demand related to COVID quarantine.

Among the top 10 countries by supply, Indonesia had the highest weekly occupancy rate (52%), followed by the UK (50%), where occupancy increased by nearly five percentage points week-over-week. Germany continued to have the lowest occupancy rate of the top 10 (27%), followed by Italy (27%) and Canada (33%). China saw a six percentage point drop in occupancy week-over-week due to Dalian (new travel restrictions), Beijing (actually closed in preparation for the Beijing Winter Olympics), Guangzhou and Shanghai – all down more than 20% week over week. China is gearing up for the Lunar New Year, which could also lead to reduced travel as people want to be sure they can return home for the holidays.

After falling last week, the occupancy rate in Russia increased to 47% due to strong growth in provincial Russia and St. Petersburg.

Most markets (74%) outside the United States remain within “Depression” Where “Recession” (RevPAR indexed at 2019 between 50 and 80). It should be noted that Madrid increased significantly week over week, with occupancy increasing to 41% and ADR increasing by 13%. The city hosted FITUR 2022 (an international tourism fair) from January 19 to 23. Even with improved weekly performances, Madrid remained in the “Recession” Category.

Optimism for a strong 2022 was heard on and off stage at this week’s American Lodging Investment Summit (ALIS) in Los Angeles. Most expect weakness in transient companies and groups to persist for some time and strengthen as the year progresses. While this week’s data continued to show weakness, better days are ahead as Omicron declines and leisure travel returns. STR latest forecastpublished at ALIS, predicts that the United States will reach full recovery to 2019 levels in 2023, with occupancy and ADR steadily exceeding 2019 levels beginning in the summer of 2022.