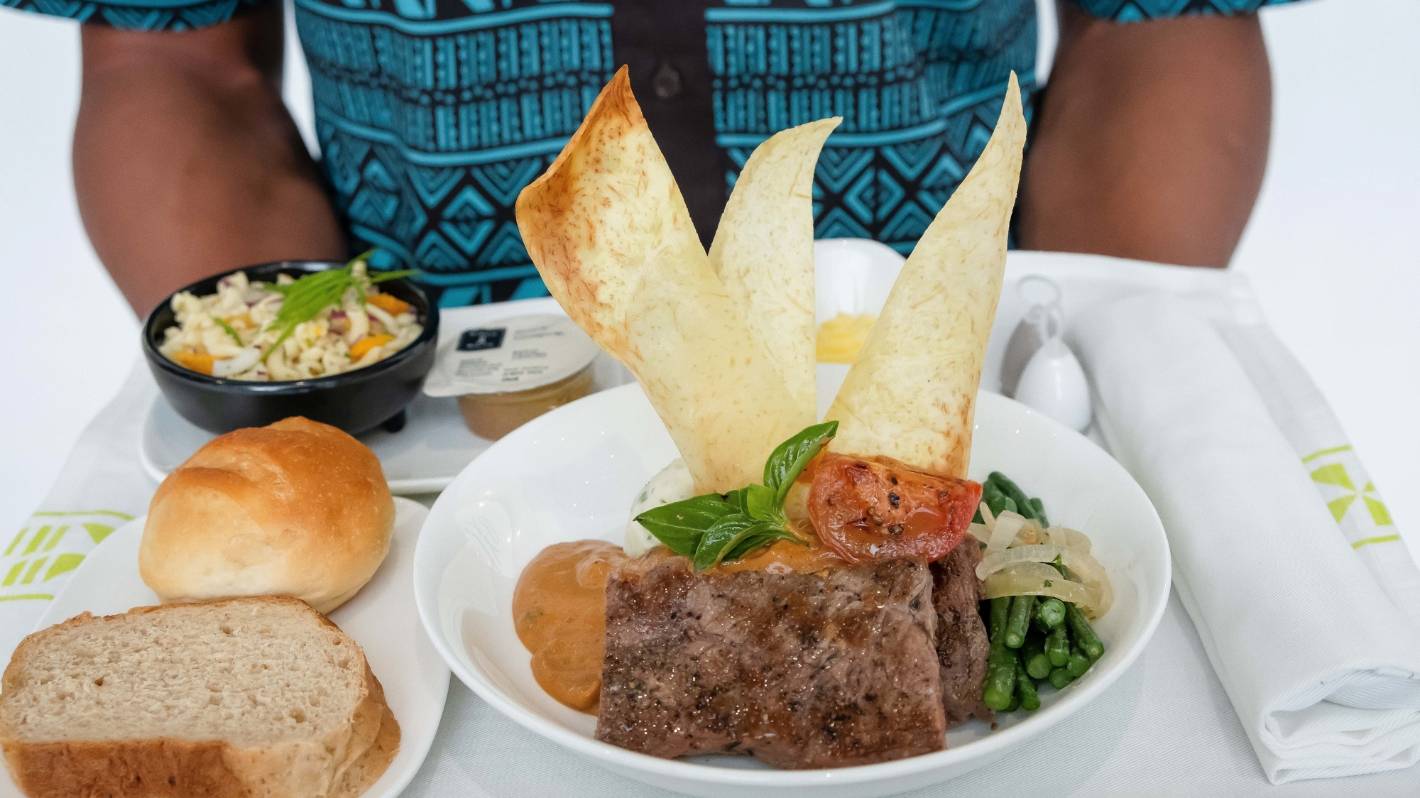 The tablecloth is laid, the silver cutlery wrapped in a napkin placed in front of me.

Next comes the main course: a plate of succulent pieces of blackened chicken, coated in spices. It is served in a puddle of tomato jam, with steamed rice and topped with crispy taro chips.

This is followed by a smooth and silky bittersweet chocolate panna cotta with a tangy berry coulis and a dark chocolate burst. The only thing that betrays its airplane food is the slight wobble when we encounter an area of ​​turbulence.

The dishes are the creations of Kiwi chef Richard Cross, the new executive chef of Fiji Airways.

READ MORE:
* Fiji Airways’ Boeing 737 Max is back in New Zealand: Here’s what it’s like to fly on it
* All airlines and international routes returning to New Zealand
*These are the Pacific islands Kiwis can travel to this winter

Since his appointment in December 2021, he has been tasked with completely redesigning the airline’s menus, which are expected to change quarterly. I sampled a business class lunch menu on a flight from Wellington to Nadi in April.

Delivering food that tastes great at 35,000 feet has been a new challenge for Cross, who has spent his career running restaurants in resorts and five-star hotels around the world.

Cross, originally from the town of Balclutha in southern Otago, got his start at some of New Zealand’s best – spending two and a half years as executive chef at Taupō’s Huka Lodge, before moving to Millbrook Resort in Queenstown, where he remained for five years.

It was while working at Millbrook in 2002 that Cross was approached by the owners of Vomo Island, an exclusive resort on a private island in Fiji’s Mamanuca group of islands.

Cross had never even been to Fiji on vacation when he took the job, but he stayed there for three years – and as he continued to work in places like Hong Kong and the Maldives, he was constantly tempted to return to the Pacific Island. nation.

In 2009, he would truly leave his mark on Fiji’s culinary scene when he was appointed Executive Chef of the Radisson Blu Resort – overseeing seven dining outlets and establishing his own fine dining restaurant, Cross.

In 2017, he returned as Executive Chef of Mana Island Resort, opening another Cross Restaurant.

Just before the pandemic, Cross was working in Tanzania, as executive chef of the Royal Zanzibar Beach Resort.

But when the role of chief executive of Fiji Airways emerged, for Cross – who now has Fijian nationality – it was the “dream job”.

“Fiji is my home now and I really want to solidify my position here,” he said.

Going from luxury hotels to a flagship airline, however, has come with challenges, including learning to cater to the needs of the masses.

“You’re not just dealing with the high-end clientele — you’re dealing with everyone, a wide range of people, from kids to seniors,” Cross said.

“You are looking at economy meals, business class meals. You must meet special dietary requirements – kosher, gluten-free, vegan. You try to please everyone.

He also cannot see the finished product. Meals are prepared on the ground under his supervision, but finished by the cabin crew on board.

To ensure everything is done to his standards, he spent time flying with the crew and showing them how to put the finishing touches on meals – how to heat them properly, garnish them and present them to passengers.

“The cuisine on board is totally different from what I’ve been used to in a restaurant,” Cross said.

One problem is that the ovens are different on each type of aircraft, which means he had to work out the optimal temperatures for each to ensure meals don’t end up overcooked.

But with the basics nailed down, Cross was able to turn her attention to meal presentation — often using dehydrated vegetables as edible toppings, like these taro chips, to add a “wow factor.”

He tries to champion local ingredients. One of his signature dishes, which will remain a staple on the business class menu, is kava and cinnamon ice cream – an unexpected use of traditional Pacific Islander culture, known for its relaxing and anti-aging properties. stress.

“I experimented with it and it took a while to find my recipe,” Cross said.

“It has a numbing effect on your palate.”

It may be a far cry from its fancy resort kitchens, but the sky didn’t turn out to be the limit for Cross. The next thing he wants to start incorporating into Fiji Airways’ menu is molecular gastronomy – using scientific techniques for edible creations. For example, he explained, your business class welcome drink might consist of little spheres of orange juice that pop in your mouth.

“These aren’t the everyday items you would see on an airline,” he said.

“I want to make that difference.”

The writer traveled as a guest of Fiji Airways.