Protests erupt in the sports arena 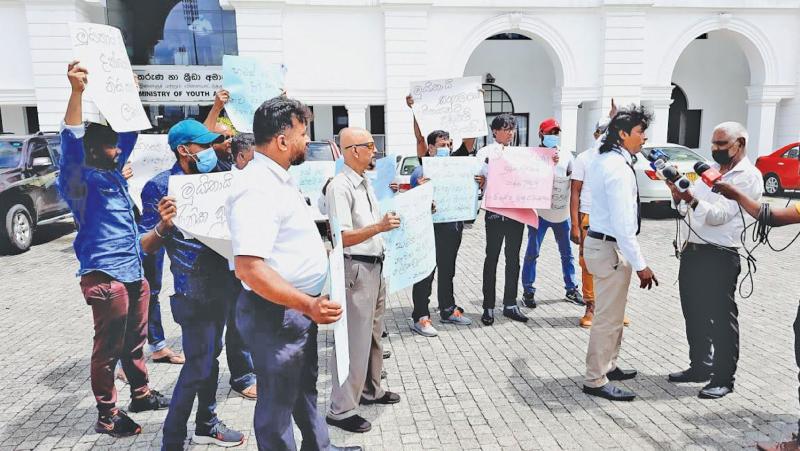 An eerie calm on a rain-swept Tuesday morning on Reid Avenue in Colombo with charred remains of buses burned during the May 9 violence near the Cinnamon Gardens police station, brought out a rowdy group of protesters fighting for justice in the sport.

As workers were absorbed in the laborious task of ensuring an even playing field for players on the hallowed turf of the racecourse, the former British playground for the sport of kings, a ragtag group of sports officials from as far away as Polonnaruwa, Kandy and Galle were ready to unleash a storm of protests which must have reverberated not only to the colonial building that houses the Ministry of Sports, but even to the occupants of Olympic House and the soccer nearby.

It was the first salvo fired by people who had served the sport with dedication for the pure love of the game, but were engulfed in a vortex of corruption by officials who would do anything to ensure their survival in power, apparently to serve the sport. but only serve themselves even at the cost of depriving the athletes of the place they fully deserve.

The protests were a stark reminder of the corruption endemic in Sri Lankan sports, with authorities turning a blind eye to the misdeeds of officials who have become law in themselves wielding power like politicians.

Inspired by the ongoing grassroots protest in Galle Face and other parts of the island, former officials from three national sports bodies over martial arts in karate-do, wushu and muay thai have reportedly been riddled with Financial mismanagement and even allegations of sexual abuse of athletes, staged the historic protest near the Ministry of Sports in Colombo.

Their message was loud and clear, giving authorities an ultimatum to act without fear or favor, promising they would return in greater numbers with the involvement of other sport stakeholders if their issues were not resolved.

It was a day when the Sri Lanka Karate-do Federation (SLKF) was due to hold its annual general meeting but was postponed on a directive from the Director General of the Sports Development Department at the Ministry of Sports, Amal Edirisooriya.

The reason was that a former secretary of the WASPJ Medonza federation had complained to the then Minister of Sports, Thenuka Vidanagama, of financial fraud to the tune of two and a half million rupees. Medonza says an investigation into his accusations of embezzlement over the past three years related to international tours, medals and venue fees, is being conducted by the CID (Criminal Investigation Department) and special investigative commissions appointed by the Auditor General’s Department and the Ministry of Sports. Two key ministry officials allegedly aided and abetted the corruption practiced by the SLKF.

Another former secretary of SLKF – Western Province Dinush Hemal alleged that eight million rupees received for hosting the 2019 Western Province Championship were not accounted for in the annual accounts. The national federation organized this event after banning the Western Province without investigating. He accused SLKF officials of unconstitutional behavior and led ministry officials down the garden path by not addressing these issues when asked to do so.

“When the department sent a letter to the federation asking officials to provide details, they did not respond to the allegations. We want the investigation of the case to be expedited and to determine whether they are guilty or not. If they are guilty of committing fraud, they should be punished,” said Hemal, who is running for the post of SLKF secretary.

The relatively young sport of muay thai or kick boxing thai is also plagued with numerous problems, with governing body chairman Asoka Jayaratne being found guilty of 20 counts in a 42-page report after an inquest that s was completed in February. “It has been proven that he obtained a boxing ring worth $5,000 for his personal academy under the guise of using it for the benefit of the Muay Thai Association. He also helped a national player to decamp during a Korean tour in 2018.

“But the biggest problem was when a Sri Lankan player couldn’t make it to the semi-finals of the Muay Thai World Championship in Thailand last year due to the negligence of tour officials,” said Jamitha Bandara, who has coached a Sri Lankan team. on a previous tour.

An investigation has been carried out against the national coach and president by the Sugathadasa stadium police. In addition to this, then Sports Minister Namal Rajapaksa temporarily suspended the Muay Thai Association on March 22. “We wonder why these officials are protected. We don’t trust senior officials in the department. We seek justice after providing witnesses to our complaints to prove beyond doubt that the players now languishing at home have been treated unfairly,” he added. His views were endorsed by trainer Chamila Nishantha of Lion Power Muay Thai Martial Arts Academy and Kushan Mendis of Southern Muay Thai Academy in Galle.

The most serious accusation was made against Manel Dharmakeerthi who has run the Wushu Federation of Sri Lanka (WFSL) as his personal fiefdom since the sport’s inception. “He has been running as president and secretary of the federation for 28 years, illegally holding office using political influence and smothering his rivals with threats on social media,” said Jagath Caldera, former vice president of the federation. WFSL.

“We were above India when we started wushu but now we are struggling to stay above the Maldives and Afghanistan. This is the development legacy of corrupt officials that Sri Lanka has seen It has sidelined good coaches and players, banned an association and generally anyone who goes against it,” said Bandara, a founding member of the federation.