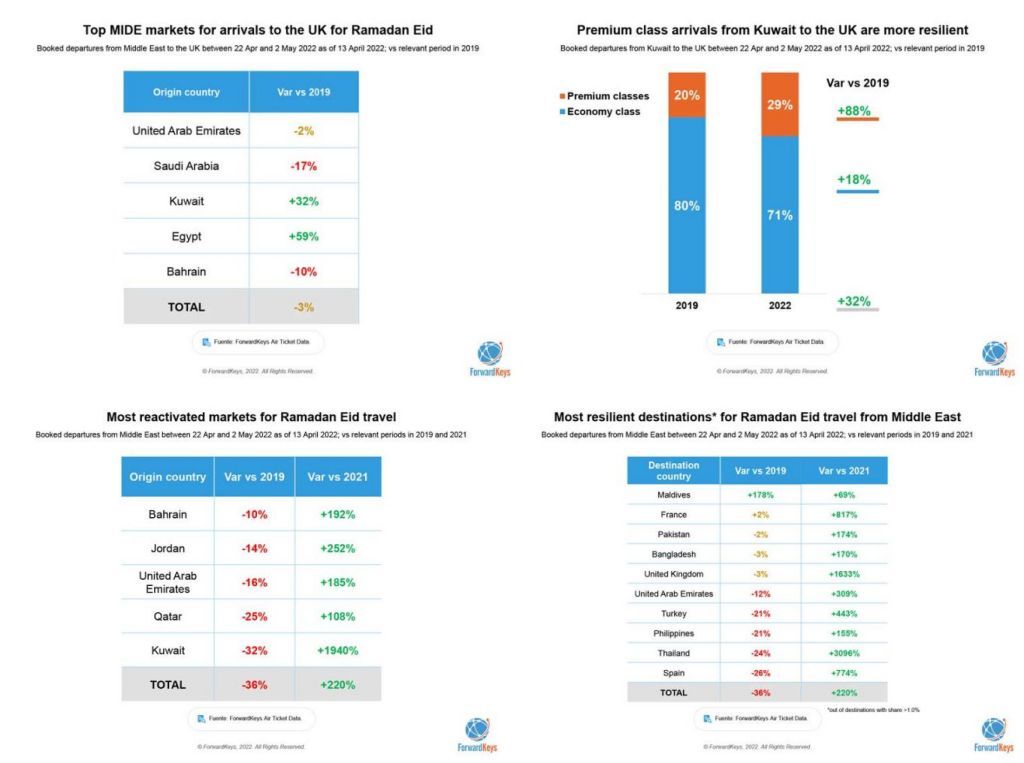 The latest data from ForwardKeys reveals that the tradition of traveling at the end of Ramadan is seeing a significant revival this year.

From 13and April, flight reservations departing from the Middle East for trips covering the last ten days of the festival (22n/a April 2n/a May) reached 64% or pre-pandemic levels, a 220% increase in travel over the equivalent period last year.

The top destination for holidaymakers from the Middle East is expected to be the Maldives, ahead of 2019 by 178%. The other top performing destinations are the United Arab Emirates, 12% behind, Turkey and the Philippines, both 21% behind, Thailand 24% behind and Spain 26% behind.

When it comes to bookings for the UK, which is traditionally one of the most popular tourist destinations during this period, there is a significant difference in interest from different source markets. Flight bookings from the United Arab Emirates, which are the largest, are only 2% behind 2019. Bookings from Saudi Arabia and Bahrain are 17% and 10% behind respectively. %, while bookings from Kuwait and Egypt are ahead by 32% and 59% respectively.

The recovery also shows an interesting trend towards premium class travel. In 2019, 20% of departures from Kuwait to the UK were in first class or business class; this year, the proportion has risen to 29%.

Patricia Yates, CEO of VisitBritain said: “The Gulf is a very important tourism source market for us and one of our highest spenders. We know there is pent-up demand for international travel, so it is encouraging to see the continued recovery in UK travel, including the strong appetite for premium class travel from Kuwait and Qatar. France seems particularly popular with visitors from Egypt, Kuwait and the United Arab Emirates, where flight bookings are ahead of 2019 by 60%, 46% and 13% respectively.

Olivier Ponti, VP Insights, ForwardKeys, concluded: “As COVID-19 travel restrictions are removed, the world is starting to travel again; and this trend is well demonstrated by the return to traditional travel at the end of Ramadan. Throughout the pandemic, the Maldives has been exceptionally successful in attracting visitors and the reputation it has built is obviously paying off, especially in the United Arab Emirates and Saudi Arabia, which together account for 83% of arrivals from from the Middle-East.