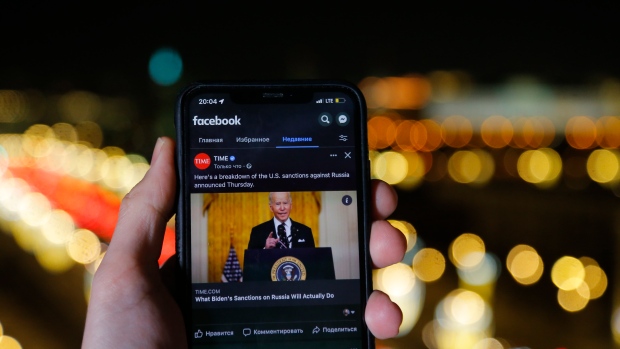 Russia’s communications regulator said on Friday it blocked Facebook from Meta Platforms Inc in response to what it said were restrictions on access to Russian media on its platform.

The regulator, Roskomnadzor, said there had been 26 cases of discrimination against Russian media by Facebook since October 2020, with limited access to state-backed channels like RT and the RIA news agency.

Meta’s head of global affairs, Nick Clegg, said the company will continue to do everything possible to restore its services.

“Soon, millions of ordinary Russians will find themselves cut off from reliable information, deprived of their daily means of connecting with family and friends, and prevented from speaking out,” he said in a statement posted on Twitter. .

Meta said this week it had restricted access to RT and Sputnik across the European Union and was globally downgrading the content of Russian state-controlled media’s Facebook pages and Instagram accounts. , as well as publications containing links to these media on Facebook.

Last week, Moscow said it was partially restricting access to Facebook, a move the company said came after it refused a government request to stop independent fact-checking of several Russian state media outlets. . On Saturday, Twitter also said its service was restricted for some Russian users.

Big tech and social media companies have come under pressure to respond to Russia’s invasion of Ukraine last Thursday, which led to economic sanctions against Moscow by governments around the world. Russia calls its actions in Ukraine a “special operation”.

He said the restrictions violate key principles of freedom of information and unhindered access of Russian Internet users to Russian media.