The changing scene for artists in Goa 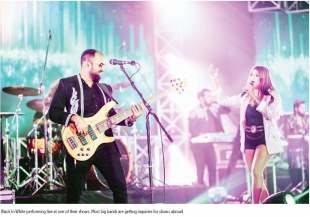 The changing scene for artists in Goa

The music scene in Goa was vibrant before Covid and being one of the first states to ease restrictions in the country, bands from Goa received a great response with national and international performances. The bands are now performing across the country as well as for shows in Goa, on a larger scale than before

Goa is known for its music and great performers. The pandemic has brought a lull for live performances but nothing can stop the music. From online gigs to practice sessions, bands are back on the road with bigger performances.

Seby Pinto, manager and musician of Forefront, a group from Goa that has been performing for over 30 years, says: “We have been booked for May Queen Ball in Doha, Qatar in 2023. We perform at this ball every year , but due to the pandemic, we had a two-year break. After the ball, the group will participate in the world convention. We are booked for prom almost a year in advance.

“The wedding season in Goa is back in full force. It was better than before and we have already booked for next December and January. We have also organized many corporate events which shows that there is a great improvement in the music scene in Goa,” adds Seby.

The group Black In White recently returned from Dubai, where they performed at a party in Sao Joao. During this year, they have performed in cities like Delhi, Ranchi, Pune and Coimbatore for destination weddings and corporate conferences. “I feel more than the hiatus during the pandemic, it was the progression of the group that was noticed by the public. Since the start of the wedding season in October, we were sold out. In December 2021, we could not have -have only had a few days off,” says Royston Noel, the band’s manager and keyboardist.

The seven-member group has received requests for international shows and they are still finalizing the details. “We will most likely be performing in Dubai in February 2023. No special documents required after Covid,” Royston adds. The group practices whenever the members are free and are currently fine-tuning their retro acts.

Orlando de Noronha is the man behind the creation of CIPA, home to MadraGoa, the world’s first fado and mando house. He plays the Portuguese violin and guitar and has won accolades for his performances in India and abroad, especially in Portugal. “I last performed at a concert in Coimbra, Portugal in October 2021 with my guitarist Oscar do Rosário and Portuguese musicians. We provided the backup to internationally renowned fadista Cuca Roseta. This times we went under the name ‘Fandoziando’, a word coined to include Fado and Mandó.The show was organized by Serenata Patrimónios ‘Mondego-Mandovi’, meaning the rivers of Coimbra and Panjim. The show was organized and held at the Convento de São Francisco, Coimbra,” informs Orlando, who has stopped doing regular weekly shows but only performs for private functions.

He further adds, “Covid has definitely created a huge impact as many shows have been canceled, but on the other hand, it was a good time for us to practice and catch up. So far, nothing has been finalized for our overseas performances in the coming months,” says Orlando.

Lester Rodrigues, A26’s manager and lead vocalist reports huge demand for the band over the past two months. During the lockdown, the band had to be innovative and perform online for live performances at corporate events. They had a wedding in the Maldives, one in Dubai, they had Goa Day and a wedding in November 2021. “We are taking a one week break after almost eight months. We constantly played or travelled. The market has changed dramatically for the good,” says Lester. The band recently completed a six-city tour, “The A26 – Cohiba and Kingfisher Tour”.

The group practices for 4 to 5 hours, three times a week. During the confinement, the group released a song every Wednesday on its YouTube channel. “We used to have corporate shows online. We had to equip the studio with cameras, high-end equipment and the fastest internet connection. The pandemic has taught us to adapt to changing situations and we have to be prepared for any unpredictability,” says Lester, whose band will perform for a wedding in Thailand in November.

Updesh Swar has hosted and hosted a variety of events over the past 20 years. “For two years, the response has not been great for international shows. There were different restrictions imposed by the government and the crowd also had to be limited. The sponsors were not prepared to spend the money as many people faced payroll deductions and even job loss. Everyone was playing it safe because they didn’t want to cancel the shows at the last moment. Now there is a change and events are accelerating. People are waiting to hear good Goan music and are slowly coming out for shows,” says Updesh.

Denzil Pereira of the group D&T, with Trisca Fernandes, received requests for a concert in Turkey. Being busy with shows across India, Denzil works with a four piece band with backup musicians in case anyone gets sick. “Goa is holding more shows than before the pandemic. There are larger-scale casino shows, corporate events and destination weddings, with Indians having more spending power. Last December was busier than before the pandemic. For inter-shows, their questions usually relate to fully vaccinating band members. We do not negotiate on the reduction of the budget. The pandemic has taught us to stay humble and thank God,” Denzil says.

With the situation improving, we only hope we can hear more fantastic music in the coming days from our Goa performers.