The destinations Bollywood made us fall in love with 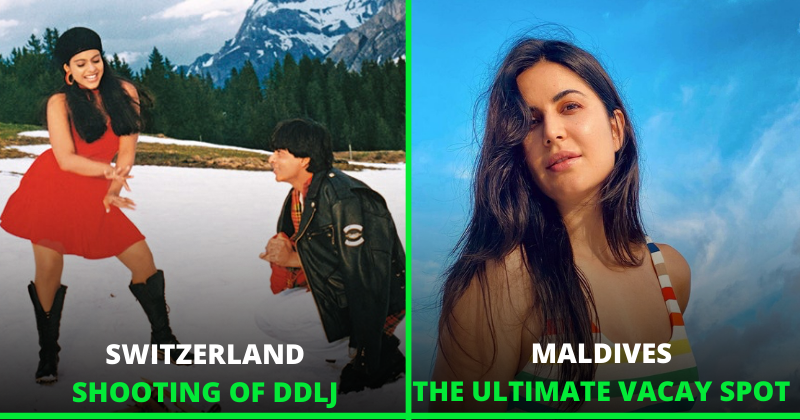 Bollywood has taken us places time and time again via the silver screen, making us want to pack our bags and travel to a land far, far away. Whether it was Simran and Raj’s European tour in 1995 out of DDLJ or Ved and Tara’s epic trip to Corsica in 2015’s Tamasha, we’ve all longed to visit one place or another thanks to our Bollywood films. The Maldives has certainly become the number one vacation destination as celebrities first flocked to the beautiful island in 2020 and continue to do so.

So let’s take a look at some popular holiday destinations made popular by Bollywood.

Celebrities flocked to the exotic vacation destination in 2020 and never looked back. Almost every B-Towner has pictures of the Maldives on their Instagram. As well as being a popular holiday destination for Bollywood stars, various films including Mohit Suri’s Ek Villain and Hrithik Roshan’s Kites.

Whenever Corsica is mentioned, one cannot help but think of Ranbir Kapoor and Deepika Padukone saying: “What happens in Corsica, stays in Corsica. The 2015 release Tamasha popularized Corsica in France as a vacation destination.

Zoya Akhtar’s Dil Dhadakne Do was filmed in Istanbul, Turkey, and focused on various beautiful destinations such as Rumeli Castle, İstiklal Avenue, and Galata Tower, among others.

It’s no secret that Bollywood loves Switzerland. In 1995, Dilwale Dulhania Le Jayenge took us to the snowy mountains. Till date, the place where the movie was shot is a favorite among tourists. Other films shot in Switzerland include Bachna Ae Haseeno, Chandni, Chori Chori Chupke Chupke, Dhoom 3 and more.

At some point, we all wanted to pack our bags and go to Spain with our friends, just like the three protagonists did in Zindagi Na Milegi Dobara. From various adventure sports to beautiful sights, the country has it all.

Kangana Ranaut embarks on a journey of self-discovery in 2014 with Queen after being dumped by her fiancé just before the wedding. The film also introduced Amsterdam and captured life there.

Much of Shah Rukh Khan’s Happy New Year was filmed at Atlantis The Palm, Dubai, making it a popular holiday destination. Other films shot in Dubai include Welcome, Dabangg and Race.