The tourism paradox: is the Maldives facing an existential crisis? 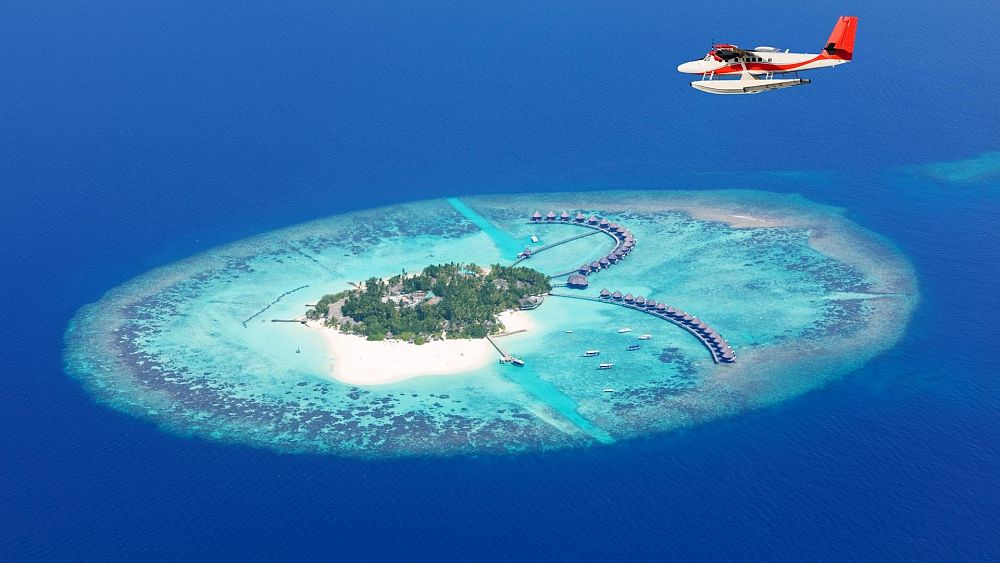 The Maldives are a tropical paradise with pristine white sand beaches and spectacular coral reefs – but they could disappear by the end of the century.

That’s the verdict of the country’s environment minister, Aminath Shauna, who says that unless urgent action is taken to stem the climate crisis, the Indian Ocean archipelago of more than 1,000 islands could be underwater by the year 2100.

“Climate change is real and we are the most vulnerable country in the world,” says Shauna. “There is no higher ground for us. It’s just us, our islands and the sea.

The nation sits at an average height of just one meter above sea level, making both ground swell increase and unpredictable weather conditions pose an imminent threat to life on coral atolls.

While the very survival of the Maldives depends on limiting the impacts of climate change, the majority of the country’s 540,000 citizens rely on tourism as their main source of income.

The travel industry produces approx. 8% of annual CO2 emissions globally – a figure that is expected to increase by 4% each year.

This fact underlies the paradox facing islanders today: a battle to survive the climate crisis while simultaneously relying on an industry that contributes to it.

“Where are you going to get national income from if not tourism?” says James Ellsmoor, CEO of Island innovation, a global network helping to drive lasting change in island communities.

“Although everyone agrees that depending on tourism is a problem, there are not enough viable alternatives. I think these places are looking inward and seeing what they can do to lessen the impact of tourism, on which they depend so heavily.

With the future of the Maldives hanging in the balance, it’s no wonder some hoteliers are embracing greener ways of accommodating their guests.

“36 years ago, Villa Hotels Resorts was founded with a idea of ​​sustainability in mind,” says Khadheeja Sana, spokesperson for the Maldives resort.

“Today, we take great pride in leading the way in maintaining and promoting sustainability, conservation and preservation.”

One of the eco-friendly solutions offered to resort visitors is the “Zero” restaurant – a farm-to-fork initiative promising negligible food miles at every meal.

“Guests can choose organic produce from our local farms, have it prepared by a professional chef, and enjoy it right away,” says island host Ibrahim Aleef.

“We also hand select some ingredients from these farms, such as lettuce, passion fruit and many more.”

Just around the corner from the garden, a bottling plant recycles glass containers for use around the holiday complex.

“We are preparing over 2,000 bottles to distribute to our rooms and facilities,” adds Aleef. “By doing so, we are greatly reducing the need for plastic bottles on the island.”

These bottles are then filled with purified rainwater, a process that produces drinking water for customers and residents.

The coral is dying

Such measures offer practical solutions to offset the island’s emissions. But for many islanders, the question remains: is it really enough?

The Maldives has around 2,500 coral reefs, making it the dominant ecosystem in the archipelago.

As the temperature of the ocean increases, the symbiotic algae in the coral turn white – a process called whitening. It may have disastrous consequences for the vitality of the whole reef.

Already, more than 60% of the corals of the Maldives have already been bleached, according to a report in The Guardian.

“As a local living here, I am worried about the health of our reefs and marine life,” says Baa Atoll resident Ismail Hisham.

“I’m very proud of the beauty of our coral, but at the same time we need to protect it for future generations.”

That sentiment is shared by the island nation’s experts, who are working hard to conserve the eighth largest coral reef system in the world.

“What we hope to achieve is try to preserve as much biodiversity as possible,” says Aya M Rahil, a marine biologist at the Coral Institute in the Maldives.

“We want to try and restore areas that we can’t protect and hopefully be able to maintain biodiversity in the future as well.”

The Maldives currently spends 50% of its national budget on climate change adaptation efforts, such as building dykes to protect coral reefs.

But the coronavirus pandemic has had severe economic consequences, decimating the tourism industry and shrinking the economy by more than a third.

“The big problem over the past two years was that a large part of the national income was dependent on tourism,” says James Ellsmoor.

“With so much national revenue coming from tourism, there was no money left to respond to the climate crisis.”

Could the Maldives lose it all?

Today, the country is trying to rejuvenate its primary industry, while continuing to encourage a more sustainable approach to travel and tourism.

“Ten years from now, our vision is to see a world where people and nature live in perfect balance and harmony,” says Khadheeja Sana.

“A world where people learn to respect mother nature. A world where our children will see better Maldives. I want my children to play on the same beaches, enjoy the same tropical gardens where I grew up. This is my dream.”

But while there is optimism, the reality of the current climate crisis speaks for itself.

the Paris Climate Agreement 2015 intended to limit the rise in global temperatures to more than 1.5 degrees Celsius above levels recorded at the end of the 19th century.

But a report from Intergovernmental Panel on Climate Change says the world is on track to exceed this goal by 2030 – much sooner than originally predicted.

“It’s an existential thing for us and what we need is for the temperature to stay below 1.5 degrees Celsius,” says Rahill.

“Even at two degrees Celsius, predictions are that 99% of corals will die globally. For the Maldives, that means we lose our livelihoods, we lose our physical security, we lose our land, we lose everything.

Like many citizens, Rahil believes his country’s future does not lie in sustainable tourism – but in world leaders who have the power to effect change.

“I hope the leaders make drastic changes now and treat this as an emergency because it’s not just going to affect us – it’s going to affect the whole world. It’s a matter of life and death. “

Watch the video above to learn more about the Maldives’ fight against the climate crisis.